Welcome to my blog

Make the right choice! Millions of people will purchase some kind of drinking water filter over the next year, but unless they purchase a Multipure system and filter, they will be buying a product that provides less than ideal drinking water. 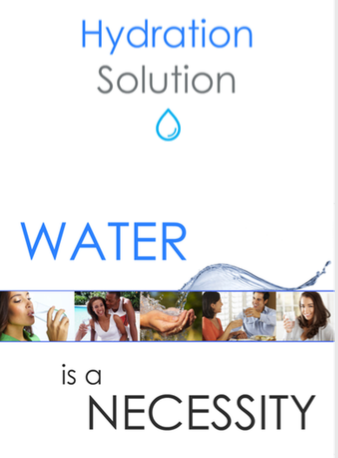 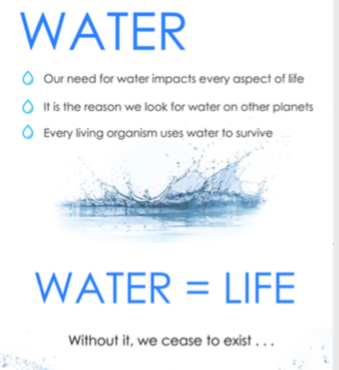 Two Republican bills seek to grant the hydropower industry a "fracking-style freedom" that would destroy ecosystems.

A bill pending in the U.S. Senate would give the hydroelectric industry and the Federal Energy Regulatory Commission (FERC) the kind of unconditional authority more akin to what the Robber Barons enjoyed in the late 1800s, than to what reasonable people might expect today.
Read More: 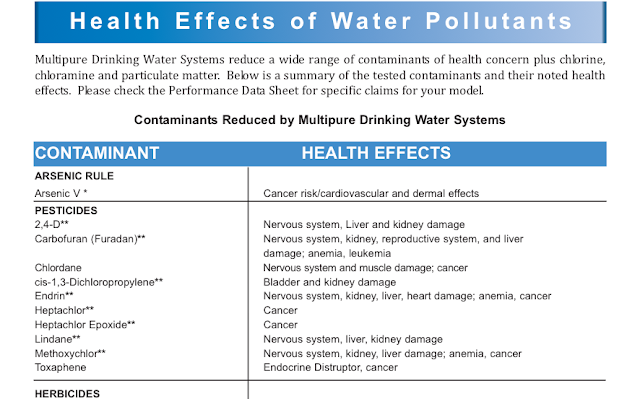 A new study published in the peer-reviewed journal, Environmental Health Perspectives,
identifies key chemicals in the formation of breast cancer tumors. Sponsors of the study advocate methods to limit exposure – including the use of solid carbon block filters for drinking water.

To protect drinking water from disease-causing organisms, or pathogens, water suppliers often add a disinfectant, such as chlorine, to drinking water. However, disinfection practices can be complicated because certain microbial pathogens, such as Cryptosporidium, are highly resistant to traditional disinfection practices. Also, disinfectants themselves can react with naturally-occurring materials in the water to form byproducts, which may pose health risks.
Read More:

LISLE, IL, March 4, 2013 (Water Tech) — The Water Quality Association says homeowners concerned about trihalomethanes in their water supply should turn to certified products to learn about options for removing the contaminant, according to a press release
Read More: 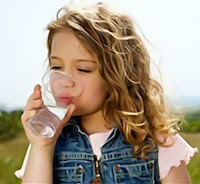 Multipure Commentary:
Multipure Drinking Water Systems have been certified by NSF International, under Standard 53, to reduce Trihalomethanes, a VOC.

Recent Study Reveals the Effects of Not Drinking Enough Water


(NaturalHealth365) More than four out of five of America’s largest cities add fluoride to municipal water sources, a trend that has been growing since Grand Rapids, Michigan became the first to do it in 1945. For decades, scientists have been enamored with the association between fluoridated water and a decreased rate of tooth decay among the communities that drink it.  ... Read More (NaturalHealth365) If the current trend towards warmer surface temperatures in our oceans and lakes continues, we can expect to see higher mercury concentrations in fish and shellfish – along with increased health risks for humans. In a new study published in the scientific journal PLoS One, researchers at Dartmouth College examined killifish – small fish common in saltwater marshes – ... Read More 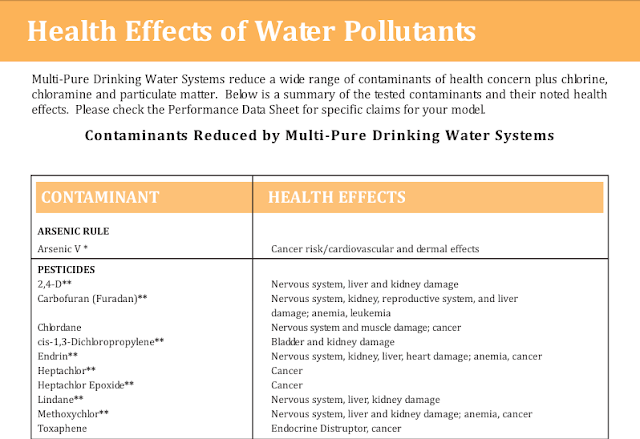 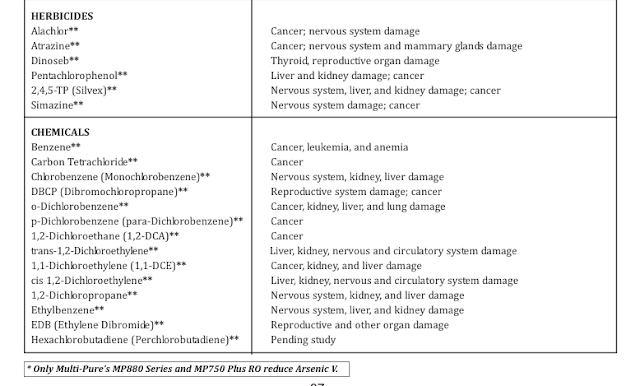 January 8, 2014 (Water Tech) - Fracking involves injection of a liquid that is usually a mixture of water, sand and chemical additives.

What is it:
Fracking, or hydraulic fracturing, is a process used by many oil and gas recovery operations. It involves injection of a liquid that is usually a mixture of water, sand and chemical additives.

Knowledge of chemicals is limited

WASHINGTON, DC, January 20, 2014 (Washington Post) — There are more than 80,000 chemicals in the United States cataloged by government regulators, and the health risks of most of them are unknown.

This became glaringly obvious when, on Jan. 9, a clear, licorice-smelling chemical leaked from an old storage tank into the Elk River in West Virginia, contaminating the drinking water for a big chunk of the state, including the capital, Charleston, before making its way down the Ohio River.

What made the spill alarming was not only the reports of rashes, stomachaches and other ailments, but also the paucity of solid information about the potential toxicity of Crude MCHM, which is primarily composed of a chemical named 4-methylcyclohexane methanol.
The 15-page Material Safety Data Sheet for the chemical, which is manufactured by the Tennessee-based Eastman Chemical Co., uses the phrase “No data available” 152 times.

So sketchy is the public-health system’s understanding of the chemical’s toxicity that officials wound up backtracking on whether it was safe for everyone to start drinking the water again after the do-not-use order was lifted last week.

At first, the Centers for Disease Control and Prevention said the water would be safe if it had less than 1 part per million of Crude MCHM. But then on Wednesday, the state Department of Health and Human Resources, after consulting with the CDC, said pregnant women shouldn’t drink the water until officials declare it free of any trace of the chemical.

“There are extraordinary gaps in knowledge,” said Daniel Horowitz, head of the U.S. Chemical Safety Board, an independent agency that investigates industrial accidents.

Chemicals in the United States generally are treated as innocent until proven guilty. A company does not have to prove that a chemical poses no health hazard in order to introduce it into the commercial market.
To read entire article, go to:
http://www.dispatch.com/content/stories/national_world/2014/01/20/
knowledge-of-chemicals-is-limited.html

Arsenic water treatment technical tips
A breakdown of this harmful contaminant and what customers must be mindful of.

February 3, 2014 (Water Tech - editorial staff )
Today, most consumers and prospects are at least mildly aware of the health risks involved with drinking water containing high levels of arsenic (As), or even low levels over a period of time. Water treatment dealers often face a different challenge when communicating that arsenic may be present in a consumer’s water.

Since arsenic is an odorless, tasteless metalloid, which can enter water naturally through the erosion of natural deposits in the Earth, most end consumers will not be able to conclude that this contaminant is present in their drinking water without testing.

Arsenic is acutely toxic, but it also has chronic toxicity and it is a human carcinogen. Inorganic arsenic (arsenate and arsenite) is considered more of a risk than the organic forms that predominate in the diet. Skin, bladder and lung cancer have been identified from exposures to inorganic arsenic at high water and dietary exposure levels.

Fluoride is put in your drinking water 'for your teeth' without your consent, but did you know that it could also be calcifying your arteries? 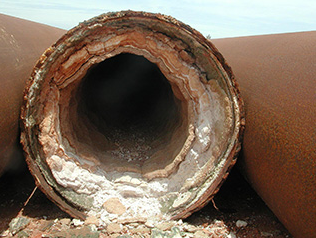 How Lead Get???s In Your Drinking Water

Until the 1980’s, lead piping was commonly used for residential home water supply systems. While the lead piping itself is insoluble with water, corrosion of the piping ultimately results in traces of lead dissolving into the water. Brass faucets and fixtures can also leach significant amounts of lead into your water supply.

3,000 deaths from lead poisoning every year. It’s a serious problem and it’s found in your drinking water. What can you do about it? Find out now!
Read More: 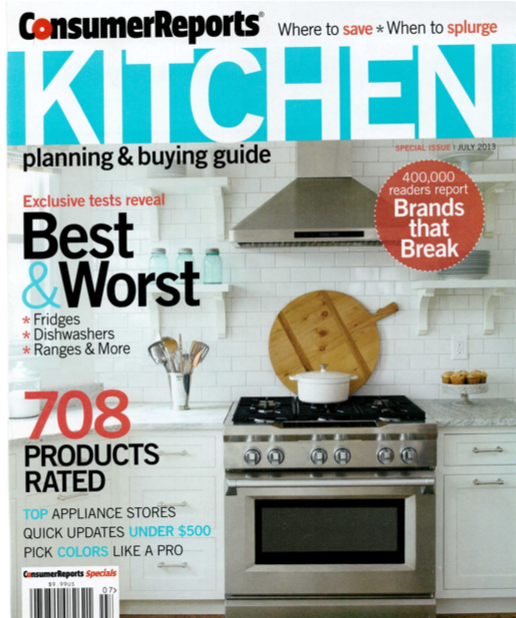 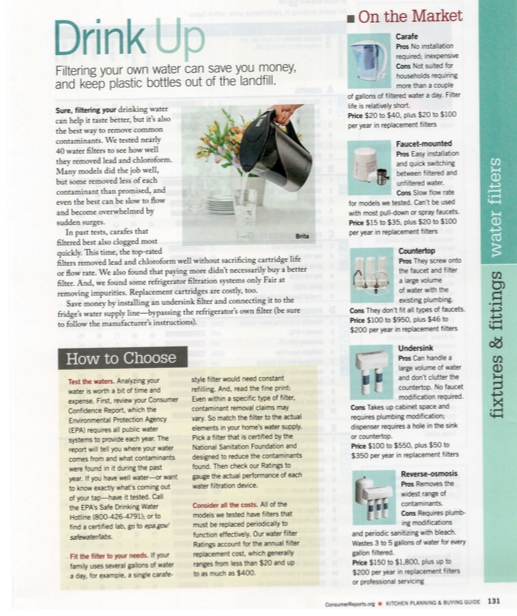 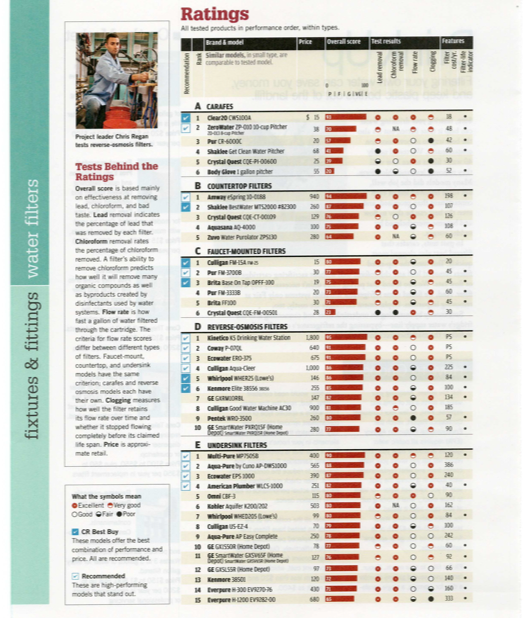 …In the article, Cotruvo explains that a significant component of the quality of drinking water is salinity (dissolved solids), which can be beneficial or harmful, as well as aesthetically pleasing or a reason for rejection of the water.
He states, “Distilled water, desalinated water and rainwater have minimal salt content. Seawater and brines have tens of thousands of parts per million (ppm) of salts, and typical drinking waters can have hundreds to well over 1,000 ppm, mostly less than 200 ppm concentration (ppm equals milligrams per liter of water). The problems are: How much is too much salinity? What are aesthetic issues? Are there any potential health consequences, and can it be managed at a reasonable cost?”
http://www.watertechonline.com/articles/169383-understanding-salinity-in-drinking-water

…Although nitrates and nitrites may still contaminate consumers’ drinking water supplies after they have been municipally treated, domestic wells are at a higher risk of contamination as they are not federally regulated to monitor nitrate levels. Water dealers must educate their customers the right way and adequately understand certification criteria and system performance.
High levels of nitrate contamination can lead to such health concerns as “blue baby syndrome,” or infant methemoglobiemia. However, the greatest risks to infants from nitrate exposure occur when both microbial contaminants and nitrate are present in water…
http://www.watertechonline.com/articles/169265-educating-customers-the-right-way-when-it-comes-to-nitrates
Multipure Commentary:
Multipure’s AquaRO has been certified by NSF International to reduce the widest range of contaminants of health concern including Nitrates under Standard 58.

Where the main water shutoff valve is located Don't wait until you have a home emergency to try and find your gas or water shutoff valves. This article will help you locate them now. Taking the time to familiarize yourself with the valves can help you avoid a disaster.

Plumbing problems: Know when to DIY and when to call in a pro

Plumbing repair is no simple matter. Unlike gardening or painting, it allows for far less margin of error.

Water, water everywhere ... or a hefty bill for a 15-minute service call? That’s a decision you may have to make when you’re faced with a plumbing problem in your home.

These days, though, chances are good that your faucets don’t even contain a washer anymore.